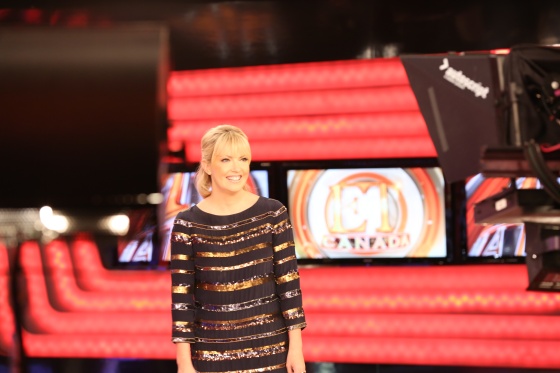 The ET Canada host talks career, family and what she really thinks about finding balance

Cheryl Hickey is the glamorous host of Entertainment Tonight Canada.  She is also wife to producer-director Kevin Foley and mom to Jaxson, four and Nyla, one.  When she’s not changing diapers and making lunches, Cheryl’s walking red carpets and interviewing the world’s top celebrities like George Clooney and Brad Pitt…

Just let that sink in…

So when Cheryl Hickey agreed to be interviewed for Martinis & Motherhood, I admit it, I did a leprechaun kick to the side.  I was that excited!

And now, fast forward one month…

Fueled by coffee and nervous excitement, with a personal mission to “play it cool,” I await her scheduled call…

And after a short delay, the result of Cheryl’s missing car keys and the juggle that followed, the phone rings!

Cheryl has just returned home from a whirlwind trip to London, England where she was filmed for a walk-on role in 24: Live Another Day, which will air June 30th on Global. Cheryl is now back on set and despite the chaos of her morning, she is calm, cool and ready to chat.

She puts me on speaker phone, while she takes part in, what she jokingly refers to as, “Restoration” with her make-up artist, Anne Rosenbloom.  With Anne on hand, I am able to get some insider beauty tips and I specifically enquire (because we moms want to know) about products and ideas to help refresh skin and the appearance of tired eyes. Cheryl is a fan of water and she drinks a lot of it to stay hydrated.

And she and Anne make the following recommendations: Jane Iredale’s Smooth Affair all over the skin to refresh its appearance.  Glow Time BB Cream as a brightening foundation. And the use of a light colour reflective, just inside the eye/nose area, to awaken the look of tired eyes. For Cheryl, Anne uses Cinema Secrets.

And now that I am in the loop, with a few new products to look into, we move on to what Cheryl’s work day looks like. Cheryl says, “It’s always a bit of a Gong Show” referring to the variety that comes with her job.  She then adds, “there’s very little that’s typical about my (work) day.”  The day begins with morning meetings, followed by time spent with her “Restoration Master” then a variety of things might come her way; she may have to conduct an interview (Cheryl recently interviewed Adam Sandler and Drew Barrymore), report on the latest entertainment news and celebrity gossip or host a Fashion Panel.

Cheryl’s work also extends beyond her role as host of ET Canada as she supports several charity organizations. Cheryl recently hosted Canada Cares Concert as a Save the Children ambassador.  She has made personal service announcements for Plan Canada’s Spread the Net initiative, to raise funds and she is also involved with the Heart and Stroke Foundation, among others.

Cheryl is all about celebrating powerful women and has interviewed some high profile names such as: Oprah, who called out Cheryl’s name in her famous way, during their interview, Celine Dion, whom she chatted with behind the scenes at her show in Vegas and Barbara Walters, whom she described as: “amazing and iconic.”

Cheryl has done various interviews with women who have made great contributions to media, technology and humanity. These interviews will be featured on ET Canada, starting Monday June 9th, in a week-long series.

Cheryl loves her job and describes the ET Canada crew as “lightening in a bottle” but she is always happy to head home to her family.  She describes her son Jaxson as, “kind and adventurous,” daughter Nyla as, “huggy, snuggly and loud” and her husband Kevin as her best friend.  Cheryl says their first date was, “the beginning” and from that point onwards, they haven’t looked back.  She is clearly a very proud mom and wife and even jokes, “I’d wear them all around in a papoose on my back if I could.”

When I ask Cheryl if she’s found a good balance between work and family life, she says, “today, yes.” She goes on to talk about the high level of pressure that society places on women.  Cheryl doesn’t feel that we, as mothers, can or should be aiming to do it all.  She says, “I don’t believe in saying you can balance it all, some things have got to give, in little ways.”  Cheryl doesn’t bow to the pressure to be everything all at once: “I am a work in progress, we all are…”

And on that refreshing note, I pose my final question: What is your cocktail of choice?  To which Cheryl responds that she’s not much of a drinker. Since becoming a mom, it just makes her sleepy.  But with some thought, she settles on a cold beer: a Stella.  Beer carries some nostalgia for Cheryl as it takes her back to her Sauble Beach days.

It’s been a pleasure to chat with Cheryl Hickey and to learn more about her exciting career in the spotlight and behind the scenes.  Despite the glamour of her work life, this Owen Sound native is as down-to-earth as they come.

You can also follow Cheryl on Twitter
Thanks for stopping by Martinis & Motherhood! This site is mostly for moms and open-minded dads and, of course, for those who sip martinis but everyone is welcome here!

A Coffee with Global’s Carolyn Mackenzie

Seven Minutes in Tahiti- Fending off your own Meltdown

2 thoughts on “A Chat with… Cheryl Hickey”