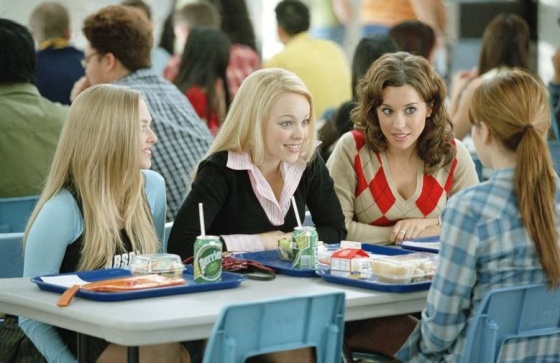 Remember them from high school?

Every school had ‘em (and they still do.)

Maybe you were one.

Or perhaps you were bullied by them.

I’m sure the decision to partake in the former was often an attempt to avoid facing the latter. A tough choice; an outcome of desperation, perhaps, or fear…

Fear that they’d be shunned by their group- left, without friends, to fend for themselves when, in fact, it could have been their chance to create some genuine friendships with other people.

Unless, of course, they’d made too many enemies during their reign as a Mean Girl in which case, staying where they were was likely the safest option, even if it did lack security and substance.

I don’t know what went through their minds.

I wasn’t a Mean Girl.

Well, not in my teen years anyway.

I was a bossy little brat as a kid, though.

Mostly toward my friends.

I’m not quite sure why but I’m inclined to blame it on OCS (Only Child Syndrome), whereby any way but my way was deemed unacceptable by me. Yeah, ME: the person whom the world was meant to revolve around.

I’ve been really lucky though. My friends chose to stay around long enough for me to discover that other people deserve to get their way too and that powerful things happen when you’ve got each other’s backs and best interests at heart.

In fact, these friendships, along with others that I’ve made through the years, are a sacred source of strength, support and laughter.

I can’t help but wonder if the Mean Girls from high school have been able to have friendships like that.

I also wonder if they ever think about the isolation and sadness that they made people feel back then or of the long term consequences of their cruelty.

Do they regret the pain that they caused? Are they embarrassed? Ashamed? Remorseful?

Will they be open about it with their own kids?

Or are they unaware of the cruel role that they played?

It’s possible that they’ve carried on as they were and are now the bitchy moms at the soccer game, checking to see if your yoga pants are lululemon while mothering daughters who are destined to be the next generation of Regina George and Co.

I wonder if the Mean Girls ever meet up with their high school crew and if so, do they slip back into old behaviours in each other’s presence?  Whereby they start randomly incorporating “like” into the conversation with their noses stuck in the air and their heads cranked to the side in a bid to maintain hair placement.

Do they still make fun of people?

Or have they moved on from this, and each other, with the intention of becoming kinder, more genuine people?

I’m also a bit confused by their smiles when I see them at the grocery store. Is it their way of apologizing for the things they said and did back then- a signal that they are no longer mean?

When I hear people say: “they’re nice now,” should I not be skeptical? Because, I am…

I almost need to see them wearing a t-shirt or a badge that says: “I was a Mean Girl and I’m Sorry…”

I’d like to know that they acknowledge the way they were and the hurt that they caused before I accept that they’ve changed for the better. I hope they can at least be honest with themselves and use their experiences to help their kids make better choices.

Maybe they’ll even reach out and apologize personally to the people that they belittled and bullied.

I have more questions than answers when it comes to Mean Girls and bullying in general but I know this: if I ever found out that any of my daughters were bullying or picking on people, I’d be deeply saddened. Firstly, I’d look into why it was happening and then, I imagine, we would go straight to the victims and hopefully work together to find a way to make it up to them. But, I really don’t know how I’d react.

I’d be inclined to drive my daughter to school, park right out front, windows down with Tom Petty’s Free Fallin’ playing- full blast. I’d then hop out of the car, with my nose held high, while revealing my best Mean Girl outfit (circa 1990), including a tucked in sweater. With an orange face, big hair and a crooked neck so it hangs just like so, I’d shout: “Have a great day honey!” And off she’d go, knowing what it feels like to be humiliated.

I’m all talk though, I’d never publicly embarrass my daughters… not unless it was absolutely necessary.

There won’t be any Mean Girls in this family, though- hell no!

And if any come around, anywhere near my girls they’d best keep an ear out for Tom Petty in the distance and be very, very afraid…

This post has been inspired by, Tara Wilson, who writes over at Don’t Lick the Deck.  We’ve become friends recently, through BLUNTmoms.  Please go and read her heartbreaking story of the suffering that she endured in high school.

It’s called: Losing my Ticket and my Trust.

2 thoughts on “Can a Mean Girl change her ways? That is the question…”