Every once in a while a day begins in such a way that you just know a drink will be had at the end of it. Last week, Becky had one of those days…

Becky is a busy wife and mom of 2 who spends her working hours counseling some of Ottawa’s youth. She is a juggler, as most moms are, a classic example of a modern day mother. Becky is well aware that the journey of motherhood is neither smooth nor predictable. She knows that there’ll be times when she is victorious and times when she clearly is not, like last Friday… 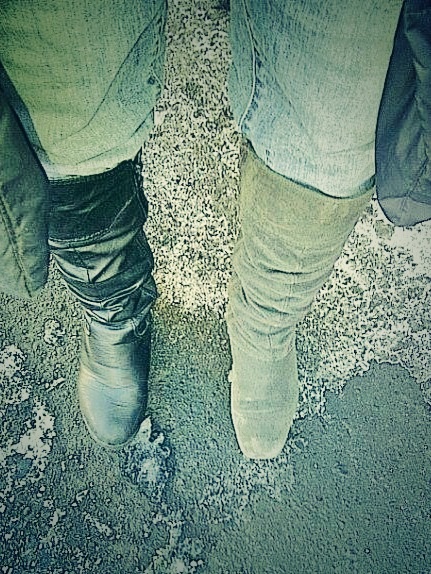 “Is it that obvious?”

Despite her footwear mishap, (a result of a toddler distraction during the boot selection process) she is able to laugh along with her colleagues and students.

Becky knows that laughter is key in her role as a mom.

At around 10 am, on the day of the mismatched footwear incident, Becky discovers the home phone in her purse. Luckily her cell is in there too. Recalling a very tasty cocktail she’d enjoyed recently, she sends the following text: How do I make a French Martini?

Becky knows who to call on for drink recipes.

Now, in honour of Becky, and those who have walked similar paths, The French Martini will (indefinitely) be referred to as: The Disheveled Momtini. This is how you can make one…

1. Fill a metal shaker with ice.
2. Measure and pour in all of the above ingredients.
3. Shake, shake, shake and strain into a martini glass.
4. Serve to your favourite disheveled mom friends and the ones with matching shoes too.

TOAST to laughter instead of tears.